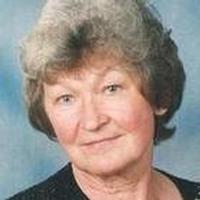 Waltraud “Trudy” von Brevern, 72, Gillett, went to be with the Lord Monday December 24th, 2012 at Maple Lane Nursing Home in Shawano. She was born on October 17, 1940 in Germany. Trudy is survived by her two sons and their spouses, Ralf (Teri), Gillett; Mark (Annette), Seymour; her two grandchildren, Eli von Brevern, Allison von Brevern. Friends may call from 9 a.m. until 11 a.m. Thursday December 27th at Kuehl Funeral Home in Gillett, WI. Funeral services will be held at 11 a.m. on December 27th with Pastor John Laatsch officiating. Burial will be at Wanderer’s Rest Cemetery in Gillett, WI. A luncheon will be held following the graveside service at the Assembly of God in Gillett. Kuehl Funeral Home 920-855-2144 will be assisting the family. The von Brevern family would like to extend a special thank you to all staff members at Maple Lane Nursing Home for their care and compassion for Trudy.