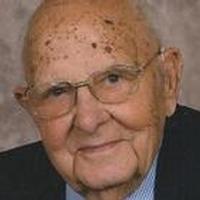 Bud was born December 15, 1917, in Laona to Robert R. and Cloa (Cournoyer) Quade. After moving to Gillett at the age of seven, Bud graduated from Gillett High School. He met his wife, Kathleen Cunningham, and they were united in marriage on October 15, 1940, at St. John’s Catholic Church, in Gillett. She preceded him in death on January 18, 2002. Bud served in the US Army during WWII. He was a member of ”The Crozier Society” Catholic Foundation in Green Bay, St. John’ Catholic Community in Gillett where he served as trustee for many years, served as an usher, CCD instructor, council president and janitor, whatever needed to be done Bud would do it. He was a Charter member of Gillett Lions Club, Gillett American Legion, Gillett VFW, Gillett Snow Riders, Gillett non-profit housing authority and Gillett Industrial Development Corporation. Bud owned and operated Quade’s Five and Ten as well as Quade’s Ben Franklin Stores. He was an avid gardener and forester; he enjoyed spending time in his garden and in the woods cutting brush and splitting fire wood. In the evenings Bud enjoyed sitting watching a fire and praying his rosary.

For their loving care, Bud’s family would like to thank the staff and residences of The Cottages at Meadowland and Heartland Home Health Care and Hospice.