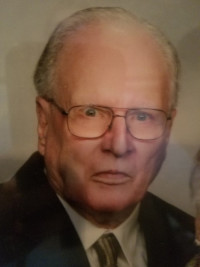 Mort was born November 30, 1923 to the late Julius and Kathryn (Weidner) Gentz at Bowler, WI.  He graduated from Bowler High School in 1941.  On June 14th, 1944, he married the love of his life Lorraine Hoefs at Zion Lutheran Church in Zachow, WI.  He was a proud WWII Veteran, serving his country in the U.S. Air Force as an aerial front nose gunner on B-24 Bombers in the Pacific Theater of War.

Following his military service, he and Lorraine worked for Red Owl Stores.  They owned and operated Gentz’s Flowers and Greenhouses in Gillett retiring in 1978.  They went on to spend 22 years at Finnegan Lake, building a home and caring for flowers, trees and multiple vegetable gardens.

In 2000, they moved to apartment living.  Mort was active in volunteering for Boy Scouts, Northern Gardeners, Revitalize Gillett, Oconto County Historical Society and was a paid-up life member of Krause-Simpson American Legion Post #300.  He was a member of St. John’s Lutheran Church serving on council and various committees of the church.  He was a co-chair for the church’s 100th anniversary celebration.  Mort and Lorraine were honored as Grand Marshalls for the 2005 Fourth of July parade.

The family would like to express a special thank you to the ThedaCare Hospice Team of Appleton for all their loving support.