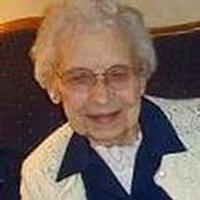 Marjorie Alice (Ollmann) Melchior entered into rest May 18, 2014. Marjorie was born in Bonduel on November 10, 1916 to the late Elmer and Hulda (Mayer) Ollman. When she was six years old her father bought a tavern in Gillett. She lived at home until she turned nineteen. Marjorie married Michael Melchior on May 29, 1937. Mike went on to join the U.S. Navy shortly after. While Mike was away she moved in with Kathlene Quade and worked in the Quade’s Ben Franklin Store. A year after Mike returned home, the two of them purchased a dry cleaning business in Gillett. On November 21, 1974 Michael preceded Marjorie in death and she continued to run the business alone for two more years until the business closed. She then went on to work at the former Baldwin’s Plywood until she retired, but continued a tailoring service. Pudge excelled in crocheting fine handiwork which she graciously shared with friends and family. Marjorie was an active member at St. John’s Catholic Church most of her life where she served on the Altar Society. She was also a member of the Gillett VFW Auxiliary.

Marjorie is survived by many nieces and nephews, her sister-in-law Dorothy Melchior, and many other relatives and close friends. Preceding her in death were her parents Elmer and Hulda Ollmann, and her brothers Lloyd and Vernon Ollmann.

Friends and family may call on Friday, May 23, 2014 at St. John’s Catholic Church, Gillett from 10 A.M. until 11 A.M. A Funeral mass will be held at 11 A.M. with Father Dean Dombroski officiating. Internment will take place following the mass in St. John’s Catholic Cemetery.