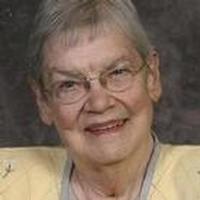 Marion D. Wagner, 90, passed away August 29, 2014. She was born on September 08, 1923 to the late Carl and Lena Makholm in the town of Maple Valley. She graduated from Suring High School in 1940, attended Waushara County Normal School Wautoma, WI in 1942, graduated from Wisconsin University – Stevens Point in 1959. She was a dedicated educator in the Gillett Public School District as a junior high English teacher, retiring in 1985. She was a member of Our Redeemer’s Lutheran Church, WELCA, church council, Gillett Women’s Club, Wisconsin Educators Association, NORTA, and various other service groups. She is preceded in death by husband Rudy Wagner, her parents Carl and Lena Makholm, brothers Austin and Leonard Makholm, and sister Lila Larsen. She is survived by her daughters Marcia Wagner – Oconto Falls, Jill (David) Bowers – Marion, grandchildren Timothy and Beth Bowers, sister-in-law Jane Makholm, nieces and nephews, and many other relatives and friends. Friends may call from 11 a.m. until 1 p.m. on Wednesday, September 3,2014 at Our Redeemer’s Lutheran Church east of Suring on Cty Road M. Funeral services will be held at 1 p.m. A memorial fund has been established.