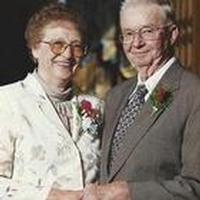 Loren Charles Schwartz, age 84, died at The Cottages in Shawano on Saturday, August 23rd, 2014. He was born January 13th, 1930, on a dairy farm in Porterfield, WI, to Carl and Cecelia (Wiedemeier) Schwartz. The oldest of 5 children, he attended school through the 8th grade, and then worked the family farm and on his Uncle Toby’s fox farm. He also developed skills as a carpenter during these years. When his younger brother, Don, reached age 18, Loren was drafted into the army for 2 years, stationed near Anchorage, Alaska , where he earned his high school diploma. Upon returning from Alaska, he worked for his brother-in-law, Elmer Kobus, who was engaged in building power transmission lines in northern Wisconsin. He attended training in Shawano with Badger Breeders to become an artificial inseminator, starting his career in Crandon and eventually settling in Gillett, where he spent the rest of his 35-year career. Loren loved his work and the time he spent getting to know the families on farms in the Gillett, Oconto Falls, and Suring areas, often times taking his children with him during their younger years. He was an avid hunter and outdoorsman, spending many years hunting deer with his good friends in the Nicolet National Forest near Townsend. He met his wife, Ethel Mary Poupore, at the park pavilion in Gillett, and they married at St. Bruno’s Catholic Church in Nadeau, MI on June 2nd, 1962. They raised 4 children in their home on Eschner Avenue in Gillett. Loren was stricken with rheumatoid arthritis at age 39, beginning a long, complex, and painful health journey. The strength and courage with which he handled this longtime illness shaped the character of all those around him. He was a member of St. John’s Catholic Church in Gillett, the Gillett Rescue Squad, the Gillett Fire Department, the Knights of Columbus, the American Legion, and was an advisor to the Gillett FFA chapter. Loren loved his children and his grandchildren dearly – never missing a sporting event or concert even on his most challenging days. Time spent at Pickerel Lake with his family, fishing trips to Canada with newly formed friends, and hunting with his sons were some of his happiest times. In his later years, as his health continued to deteriorate, he became an expert bird-watcher, kept his mind sharp putting together very difficult jig saw puzzles, spent hours visiting and drinking coffee with his buddies at local restaurants, and loved to listen to Sunday polkas on television with his wife of 52 years, Ethel. Loren is further survived by son Rodney (Karen) Schwartz of Pulaski, and their children Brittany (fiancé Kevin Arvey), Eric, and Sam; son Brian (Peggy) Schwartz of Appleton, and their children Leah, Anna, Carrie, and Isaac; daughter Renee (Dave Winger) Schwartz of Neenah, and her children Meghan, Lauren, and Ben; daughter Jodi Symons of Onalaska, and her children Emily, Stephanie, and Drew. Loren is also survived by his brother Don Schwartz of Porterfield, and sister Carol Kobus of Green Bay. He was preceded in death by two sisters, Dorothy Kobus and Marilyn Dudka. For their loving care, Loren’s family would like to thank Dr. Genadi Maltinski and his staff, Heartland Home Health Care, and the staff at The Cottages of Shawano.

Friends and family may call from 4-8 p.m. Thursday, August 28, 2014 at Kuehl Funeral Home, Gillett. Visitation will resume Friday, August 29, 2014 from 9-10 a.m at St. John’s Catholic Church, Gillett. A funeral Mass will be celebrated at 10 a.m. with Father Dean Dombroski and Sister Marla Clercx officiating. Internment will take place following the Mass in St. John’s Catholic Cemetery. Kuehl Funeral Home (920)855-2144 will be assisting the family. Per the family’s request memorial contributions can be made to either the Arthritis Foundation or Heartland Hospice.