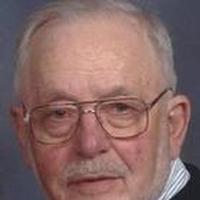 Leon was born in the township of Green Valley, Wisconsin on January 31, 1925 to the late Emil and Bertha (Lemke) Riemer.

Leon attended schools in Pulcifer and Cecil before graduating from Shawano High School in 1943. He enlisted in the U.S. Navy and served aboard the aircraft carrier USS Enterprise in the South Pacific during World War II. After the war, he received Bachelor of Science and Bachelor of Law degrees from the University of Wisconsin-Madison.

Leon and Lois (Jewell) were united in marriage on November 27, 1954, at United Methodist Church in Gillett.

Leon was an attorney in private practice in Gillett for many years. He also owned a Christmas tree farm and founded and managed Rolling Hills Mobile Home Park in Gillett along with his nephew, Allen Hansen. At one time he was appointed to be Oconto County District Attorney by Governor Patrick Lucey and served terms as municipal judge and council member in the City of Gillett. Prior to retirement, he was Oconto County Family Court Commissioner, where he also handled small claims and traffic court.

He and his wife, Lois, were honored at the Oconto County Rural Urban Banquet in 2006. He was a long-time member of the Lions Club and Oconto County Bar Association.

In his free time, he enjoyed downhill and cross country skiing, motorcycling, boating on Green Bay, working on his Christmas tree farm, caring for his horse “Horse” and dog “Dog”, driving around the countryside reminiscing, and solving the world’s problems with the breakfast crowd at OJ’s Midtown Restaurant and the lunch crowd at the Country Roads Diner.

Leon is survived by his wife of 60 years, Lois of Gillett; one son, Gregg (Patty Lucas) Riemer of Madison; one daughter, Sarah (Robert White) Riemer of West Salem; two grandchildren, Joshua Sagmo of LaCrosse, Jennifer (Cody) Newman of LaCrosse; and one great grandson, Sage Sagmo. He is further survived by nieces, nephews and many friends.

A visitation will be held on Saturday, June 13, 2015 from 1-3pm at Tabor United Methodist Church at 120 W. Main Street in Gillett.

The family would like to thank the Woodlands of Gillett Nursing Home for the compassionate care they provided over the past four years and Unity Hospice for the additional care provided in Leon’s final days.

In lieu of flowers, the family requests any memorials made to Wisconsin Public Radio, the Gillett Area Historical Society, Green Bay Botanical Garden or another charity of your choice.