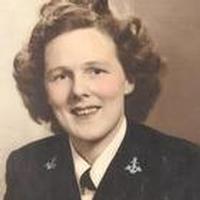 Joyce Lockstein, 92, Gillett, passed away peacefully with her family by her side, Thursday, September 27, 2012. She was born August 28, 1920, in Green Valley, WI, to the late Halfton and Hilda (Rudie) Framness. After High School, Joyce joined the U.S Navy W.A.V.E.S and served for three years during World War II, she was stationed at U.S Naval Hospital, Farragut, Idaho. After the war she came back to Wisconsin and became a farmer’s wife, choosing Gustav A. Lockstein Sr. as her partner in life, they enjoyed 49 years together, before Gust passed away in 1996. In 2005, Joyce could no longer live alone and took up residence with Woodland Village at Gillett, WI. Joyce was a beloved mother, grandmother, great-grandmother, amazing cook, especially with her apple bars that held a secret ingredient made them “Scrumpdillyishus.” She loved to crochet doilies and sew dresses for her daughter’s and herself, most of the time you could find Joyce in her kitchen wearing an apron she created. She was a member of the Ladies Aide at St. John’s Riverside Church, Gillett. To describe Joyce, she was also a top notch fisherman, average huntress, a green thumb, strong Christian example, and the “queen of the farm.” Survivors include her five children; Gustav Jr. (Sandra Francois) Lockstein, John Sr. (Jean Stujenske) Lockstein, Susan (James) Zabel, Janet (Walter) Bohm and Roger (Cathlene Funk) Lockstein; 13 grandchildren; 22 great-grandchildren; one sister-in-law, Dot (Nestor) Framness in Montana. Family members preceding her in death are her husband, Gust Lockstein Sr., two grandsons Johnny Jr. and Troy Lockstein. Other family members preceding her in death are Elaine and Robert Mercer, Fern and Howard Hobright, Rupert and Ardis Framness, Nestor Framness , Chris and Emma Lockstein, Rudy and Ida Lockstein, Emma and Henry Richter, Olga and Herman Kirsch. Family and friends may call Monday, October 1, 2012 from 9 – 11 A.M. at St. John’s Riverside Lutheran Church, Hwy 32, Gillett. The funeral service will be celebrated at the church at 11 A.M with Pastor Ricky Buhrke officiating. Interment will follow in the church cemetery. Kuehl Funeral Home (920) 855-2144 will be serving the family.