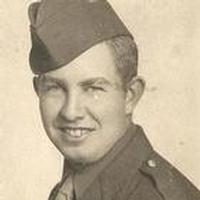 Harold O. Fust of Shawano, formerly of Gillett passed away Feb. 27, 2014. He was born Nov. 19, 1920 to the late Fred and Bertha Fust near Wittenburg. On June 13, 1942 he married Annabelle Huntington. She preceded him in death on Dec. 31, 2006. Harold served in World War II in the Army Air Corp from Nov. 4, 1942-Dec. 28, 1945 in New Guinea, Biak and Philippines receiving a Bronze Star. When he returned home from the war, he became a farmer and a logger and enjoyed hunting, fishing and gardening. Harold was a member of Christ Lutheran Church, Hintz and served many years as an elder of the church.

Harold’s family would like to extend a special thank you to the staff at Birch Hill Care Center for their great care and friendship while he was there with them. Also, to Heartland Hospice for being there for us as Harold’s Journey came to an end. Thank you to everyone who would visit and remember Harold with beautiful cards and prayers and to Pastor Michael Paholke for his hunting and fishing stories he shared with Harold and for all his spiritual support.

Friends may call from 1 p.m. until 3 p.m. Tuesday March 4, 2014 at Christ Lutheran Church, Hintz. Funeral services will be held at 3 p.m., at the church with Pastor Mike Paholke officiating. Interment will be in the church cemetery at a later date. Kuehl Funeral Home will be assisting the family