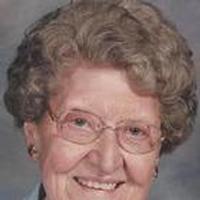 Ethel was raised in Gillett where she attended Gillett Grade School and graduated from Gillett High School in 1934 as Salutatorian. She also took classes at the Green Bay Vocational School. Ethel was united in marriage to Richard Linzmeyer on June 14, 1941 in Gillett. He preceded her in death in December of 1978. She worked at the former Norwest Bank for 54 years, retiring in 1990. Ethel was a member of the Wisconsin Bankers Association 50 year club. She had been very active in her community and church. Ethel was a Gillett School Board Member from 1959 to 1972, a member of AARP, and a member of St. John’s Lutheran Congregation in Gillett all of her life. She was a Sunday School Teacher, active in Luther League and WELCA. Ethel was a member of the Women’s Nursing Home Visitation Group which presented religious and patriotic monthly programs at the Gillett, Suring and Oconto Falls Nursing Homes. She enjoyed traveling, being with and helping her family, and visiting homebound people and nursing home residents.

She was preceded in death by her husband; grandson, Todd Dinse; brothers, Delbert and Arthur Wetzel.