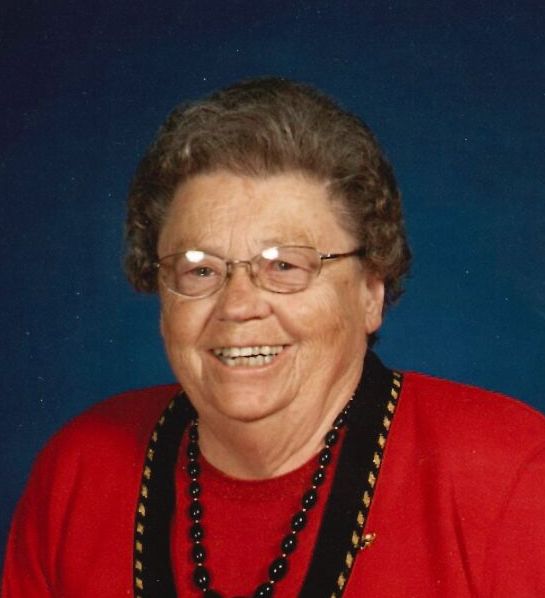 Esther was born to Carl and Hulda Mueller in the town of Gillett, along with her twin sister Emma Anna Mueller on May 26, 1923.  They were raised on a farm which the family operated until 1938 when Emma and Esther began working at a grocery store.  They went on to run Mueller’s Supermarket which they owned and managed with their brother and sister-in-law, Ray and Kay Mueller.

Emma and Esther (never one without the other!) were always seen wearing identical clothes and always ate the same food.  They enjoyed spending time at the cottage on Shawano Lake with relatives and friends and always had a good time no matter what they did.  They took many bus trips over the years, visited the Bahamas and Hawaii twice, and also went to Venezuela.  They loved playing BINGO, eating out with friends and playing cards.

Emma and Esther were longtime members of the American Legion Ladies Auxiliary and were well known for selling poppies.  They were devout Christians and were active members of the former Immanuel Lutheran Church, now Faith United Lutheran Church. Emma and Esther were also well known for volunteering for any and all causes. Esther will be sadly missed.

Esther was preceded in death by her parents, Carl and Hulda Mueller; her twin sister, Emma, her brother Raymond Mueller and his wife Kay, her sister Viola Schuettpelz and her husband Len and her sister, Sylvia, who passed away as a child.

Friends and relatives may call on the family on Saturday, October 7, 2017 from 9:30 to 11:45 AM at FAITH UNITED LUTHERAN CHURCH (11465 Old U, Gillett, WI)  A funeral service will be held at 12 noon with Pastor John Laatsch officiating.  Interment will be in Immanuel Lutheran Cemetery.

The family sends special thanks to the staff of Heartland Hospice for their kind and compassionate care of Esther.