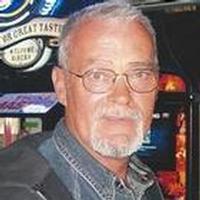 Elmore “Butch” Baumgarten Jr. passed away Thursday August 15, 2013. Butch was born on December 27, 1947 in Sturgeon Bay, WI. Later in life he moved to Shawano where he met Dorothy and decided to join hands in marriage on July 6, 1965. The two of them made the decision to start a family and along came Brenda, Elmore and James. One of Butch’s many passions throughout the course of his life was hunting with his boys and other family and friends. Butch was also a very active member of the Wolf River Harley Chapter. Everyone that knew him knew him as a very loving and caring guy and he will sadly be missed by all. Elmore is survived by his wife, Dorothy Baumgarten; his father Elmore Baumgarten Sr.; his mother Deloris Baumgarten; one daughter Brenda (Randy) Hearley; two sons, Elmore (Betty) Baumgarten III, and James Baumgarten; a sister Kathy (Dennis) Westerfeld. He is further survived by eleven grandchildren including their spouses, Rodney, Danielle, Bobby (special friend Kassy), Amanda, Adam, Ashley, Darren, Dylan, Eben, Jazlyn, and Camden; four great-grandchildren, Ethen, McKenna, Maddy, and Urijah (unborn). Other survivors include many other brother and sister-in-laws, family, and close friends. Elmore is preceded in death by one sister, Beverly Singer. Friends may call at Kuehl Funeral Home (920) 855-2144, Gillett, from 3:00 p.m. until 7:00 p.m. Monday August 19, 2013. The funeral service will begin at 7:00 p.m. at the funeral home with Pastor Paul Heykes officiating.