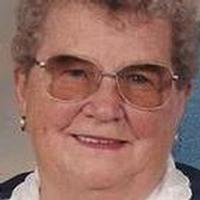 Ella B. Rasmussen, age 92, entered into eternal rest Thursday, January 10th, 2013. She was born in rural Gillett on February 13th, 1920 to the late Rudolph and Emilia Luther. On October 4th, 1941 Ella married John H. Rasmussen. Ella’s life revolved around her family and her home. She was a great mom, always putting her children’s and other’s concerns before her own. She loved playing cards, music; she played the harmonica, and also enjoyed wintering in Arizona. Ella is survived by four children, Ronald (Kathy) Rasmussen of Milwaukee, Carol (Robert) RahFaldt of Watertown, Larry (Jeanette) Rasmussen of Union Grove, and Cindy (Robert) Marsolek of Muskego. She is further survived by nine grandchildren, twelve great-grandchildren, and many nieces and nephews. Ella is preceded in death by her parents; her husband John; one daughter, Cherie, her brothers and sister; one sister-in-law; and one brother-in-law. Friends may call from 4-8 p.m. Monday January 14th, 2013 at Kuehl Funeral Home. Visitation will resume Tuesday morning from 9-11 at St. John’s Lutheran Church in Gillett, WI. Funeral services will be held at 11 a.m. at the church with Pastor Harvey Jeffers officiating. A luncheon will be held following the service at St. John’s Lutheran Church. Kuehl Funeral Home, 920-855-2144 will be assisting the family.