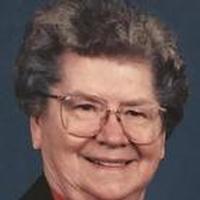 Elizabeth M. (Ratz) Sommerfeld, 87, Gillett, died March 4, 2015. She was born to the late Henry and Minnie (Peisler) Ratz on November 24, 1927 in Milwaukee, WI. Elizabeth married Herbert Sommerfeld 69 years ago on November 17, 1945 in Gillett. She was an active member of St. John’s Lutheran Church Riverside where she was involved in many church activities; Ladies aide, music teacher and Sunday school teacher, she also played the organ for many years. Elizabeth worked as a Surgical Nurse in Oconto Falls for many years, after retiring from nursing she worked at the Ben Franklin Dime store and also at Club 32 in Gillett. She was very active and enjoyed golfing, playing cards, entertaining with her accordion and bowling where she was recognized as the oldest bowler in WI. Elizabeth had a knack for working with her hands knitting, crocheting, quilting, making crafts and even sewing her children’s clothes in their younger years. She cherished hosting everyone for holidays and birthdays, Elizabeth was fond of a house full of family.

In addition to her parents, Henry and Minnie she was preceded in death by her brother, Alfred Ratz and sister, Elsie Krueger.

Friends may call from 9 A.M. to 11A.M. at St. John’s Lutheran Church Riverside, in Gillett, on Saturday March 7, 2015. Funeral Service will be held at 11:00 A.M. Saturday at the church with Rev. James Athey officiating. Burial will take place following the Funeral Service at St. John’s Lutheran Church Riverside Cemetery in Gillett.