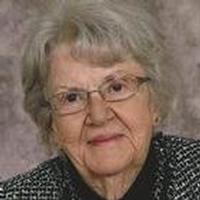 Dorothy May Luebke, 88, Gillett, peacefully passed away on Tuesday November 12, 2013. She was born on May 11, 1925 to the late Charles and Hilda (Bourassa) Loberger of Oconto. Dorothy married Carl H. Luebke in August 1946 in Oconto. He preceded her in death on March 1, 1984. Dorothy taught elementary school 30 plus years. She belonged to the VFW Auxiliary, NORTA, WREA and volunteered at the Oconto Falls Hospital. She was a faithful member of St. John’s Catholic Church in Gillett, where she served on the altar society and served as a Eucharistic minister. Dorothy loved to spend time with her family and friends. She especially cherished the time spent with her grandchildren and great grandchildren. She also loved to visit the casinos, travel, play cards, bowl, and winter in Florida.

Friends may call at Kuehl Funeral Home, Gillett, from 5 to 7 P.M. Friday November 15, 2013 and then from 9 to 10 A.M. at St. John’s Catholic Church in Gillett Saturday November 16, 2013. A Mass of Christian burial will be held at 10 A.M. with burial to follow at Wanderer’s Rest Cemetery, Gillett.