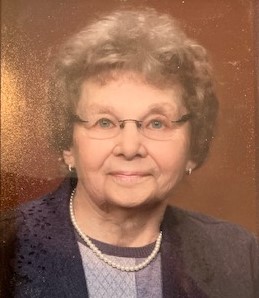 Born to Kenneth (KR) Horsens and Esther Mielke on 10-14-25. Her loving mother passed away from TB when Doris was only 5.

When Kenneth married Emma Neumann. She loved Doris as her own. They lived in Detroit where Ken worked for GM. And later moved back to the Farm on Wahl Rood. Doris and Emma milked the cows while Kenneth was on the road selling insurance. She attended Grand View Grade School and her best friend growing up was her cousin Iris Wahl.

She moved to the Pulcifer School and onto Gillett High School. After High School, she went to work in Milwaukee until her marriage to Elroy Riemer on June 22, 1946. Her friend, Frannie Fischer once told us from the time she started at the Pulcifer School she only had eyes for one person and that was Elroy. They were married 64 years when Elroy passed in 2010.

Doris loved to snowmobile and have a few highballs with special friends Lucille Horsens and Gloria Zenk. Belonging to the Pulcifer Riverside Riders Snowmobile Club. Doris also golfed for many years, sponsoring the team. Doris was also a Sunday school teacher at St John’s Lutheran Church in Pulcifer for many years and also was very active in the Ladies Aid.

They bought a farm from a Great Aunt and Uncle in 1954, raising Registered Brown Swiss with their son Michael, wife Carol and their 4 children until 2000.

Special thank you to Meadow View Estates in Bonduel to the wonderful caretakers who so were kind and thoughtful in the past 5 years. Thank you to Theda Care in Shawano and Neenah, Theda Care Hospice and all the caring RN’s, LPN’s, CNA’s who took the time to be careful and caring to Doris whose answer to everything was “I’m ok”. She thanked everyone for any little thing they did. And always had some hilarious witticisms that had them telling us “she is just so sweet.” To which we responded, “Yes, she is”. Yet we also knew she could be spunky when necessary.

Kuehl Funeral Home, Gillett is assisting the family. A private funeral has been held for Doris with a public Memorial service at Faith United Church, Gillett planned for a later date.