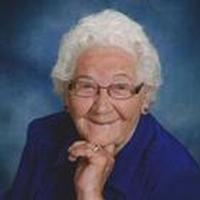 Dolores Ruby Larsen, 89, Oconto Falls entered into eternal rest Tuesday May 27, 2014. Dolores was born on July 18, 1924 in Oconto Falls to the late Oliver and Louise (Pipgrass) Framness. She graduated from Gillett High School and the University of Wisconsin at Oshkosh with a degree in upper elementary education. Dolores taught in rural schools the last nineteen years in the Pulaski school system. On May 28, 1945 she married Harold Buchholz in Las Vegas, NV. Harold preceded her in death in 1971. On Dec. 4, 1976, Dolores married Delbert Larsen. Delbert preceded her in death in 1999. Dolores was a lifetime member of Bethel Lutheran Church, Oconto Falls and was very active in church functions and activities. She had many hobbies throughout life such as traveling, gardening, crafts, and most importantly spending time with her family.

Preceding Dolores in death are two brothers; Vernon and Elwood Framness; and a sister; Beverly Natzke.