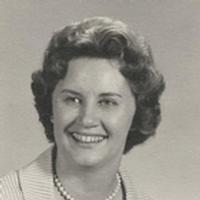 Betty Marie Ruege was born to Arthur and Lydia (Kasten) Ruege on April 14, 1931 at Grandpa August Kasten’s home, on Mackenzie Street, in Gillett, Wisconsin. She was the oldest of their five children. The Ruege family moved often during the Great Depression and War Years. The Ruege sisters and brothers attended several country schools. During high school, Betty and her sister Gaye lived with Aunt Alma and Uncle Herb in “town” attending Gillett High School. Betty graduated in 1949 and the following school year, she enrolled in Marinette Teacher’s College. It was during this time, she met her future husband, Richard “Dick” Carl Hill. He worked for Unit Structures in Peshtigo, Wisconsin.

On June 10, 1951, they were united in marriage at the parsonage of St. John’s Lutheran Church in Gillett, Wisconsin. They were married for 53 years. Dick preceded her in death on August 24, 2004.
When they were first married, Dick continued to work for Unit Structures, they lived in Peshtigo. In 1955, they moved to the Kansas City, Kansas area and lived there for about four years. From 1955 to 1957, Betty, with daughter, Debi, would travel with Dick to Rhode Island, Maryland and other various job locations throughout the Eastern states. In 1958, Betty enrolled Debi in Kindergarten at Garfield Elementary in Marinette, while she finished her second year at Marinette Teacher’s College. In the spring of 1959, the family settled in Hales Corners, Wisconsin. Betty began her teaching career in the Waukesha area, teaching grades 5-8 and the Special Education in schools in New Berlin, Genesee Depot and Mukwonago.

In 1965, the Hills moved to Gillett, building a new home, at the corner of County Road H and Highway 32, north of Gillett, across from the Ruege farm. Betty designed and decorated this home with meticulous detail. The home featured laminated beam and deck ceiling, open concept kitchen and dining area and a “balcony room” overlooking the main living room. Her floorplan and creativity was considered “ahead of its time”.

In the 1960’s and 1970’s, Betty taught in Abrams and Gillett. She taught school for 19 years, including the years she did substitute teaching for Suring, Gillett and Oconto Falls school districts. Betty also worked for her husband’s business, Wood-Tech, Inc. (formerly known as Gillett Building Supply). In the mid-70’s, they bought a building on Main and Lake Streets in Gillett. The building was remodeled and then they operated the Carriage House Supper Club until it was sold. Betty was an excellent cook and adapted many family recipes to suit the supper club fare.

Betty was a member of St. John’s Lutheran Church on Main Street, in Gillett since 1965, a member of the Women of the Church and a Gillett Woman’s Club member for twenty-five years and past president of the organization. An avid reader, she belonged to a book club and in later years could read as many as twenty books, in two weeks’ time.
Loving flower gardening, Betty planted many bulbs at the “Country House” and the “City House” to welcome spring each year. She also enjoyed watching television shows and playing card games for fun, especially rummy.

During the years they were married, Betty enjoyed travelling for business, pleasure and family vacations. Together, they visited all but three states (Vermont, Alaska and Hawaii) during their adventures.

Betty is survived by her loving daughter and son-in-law, Debra “Debi” and Doug Schroeder of Oconto; two sisters, Agatha “Gaye” (Tony) Tietyen at Atrium in Oconto Falls and Carolyn “Care) (Larry) Gipp of Suring; one sister-in-law, Charlotte (Harold) Rockney and one brother-in-law, Morris (Ida) Hill, both of Riverton, Wyoming, one former sister-in-law, Helene Ruege of Green Bay. She is further survived by three nieces: Jill (Joe) Tranetzke of Wausau, Lisa Lancour and Erika (Craig) Scaffold, both of Pulaski; two nephews, Jan (Jane) Tietyen of Amery, WI, and Colin (Alicia) Gipp of San Antonio, Texas. Betty is also survived by her husband’s nieces and nephews, the children and grandchildren of all the nieces and nephews from the Ruege and Hill families, many cousins and friends.

She was preceded in death by her parents, husband, Richard “Dick” Hill, two brothers, Ronald Ruege of Gillett and A. James “Jim” Ruege of Green Bay, a sister-in-law JoAnn “Jim” Coughlin of Fountaintown, Indiana, one nephew, Gary Tietyen of Gladstone, Michigan, her grandparents, aunts, uncles and cousins.

Visitation will be held Thursday, October 13, 2016 from 9 to 10:45 AM at ST. JOHN’S EVANGELICAL LUTHERAN CHURCH (101 W. Main Street, Gillett, WI) where the funeral service will take place at 11 o’clock with Reverend Kent Wallace officiating. Burial will follow at Wanderer’s Rest Cemetery in Gillett.

A memorial fund will be established in Betty’s name with all contributions to be given to St. John’s Evangelical Lutheran Church.
Please visit KuehlFuneralHome.com to express condolences.

The family of Betty Hill wishes to thank the staff of Atrium Post Acute Care of Oconto Falls for the loving care Betty received while she lived there. Betty truly cared for the “kids” at Atrium. They made each day just a little better for her.

A special thank you is extended to Dr. Genadi Maltinski, for his attentive care of Betty, for the staff of Bellin Hospital’s fourth floor during her last illness and to Unity Hospice for their care and compassion during Betty’s final days.

Another thank you goes to the many friends and relatives who visited Betty and kept her “up-to-date on all the news”.