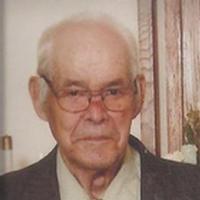 Bennie Emil Schenkoski, age 86 of Gillett, passed away on Thursday, October 29, 2015 at his home. The son of the late Emil & Emlie (Schindel) Schenkoski was born September 25, 1929 in Oconto Falls. He married Florence Schutt on October 9, 1954 in Oconto. He worked for a number of years as a milk truck driver and later at a cheese factory. He spent his remaining years farming in the Town of Gillett. He was a member of St. Johns Riverside Lutheran Church. Besides working on his farm he enjoyed gardening.