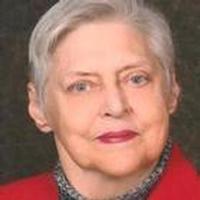 78, Gillett, died on Tuesday, February 7, 2012.
Barb was born on October 11, 1933 in Strawn, IL, the daughter of the late Louis and Margaretha (Gerlach) Meyer.
Barb was a 1951 graduate of Forrest Strawn Wing High School, in Strawn, IL, and then attended and graduated from Methodist School of Nursing in Peoria, IL. She worked for Dr. Whitaker upon graduation in Peoria.
Upon her marriage to Clayton Smith on August 30, 1958, in Sibley, IL; she made her home in Gillett and joined the staff of Community Memorial Hospital in Oconto Falls, as a surgical nurse. She then joined the staff at Gillett Nursing Home and eventually became Director of Nurses until her retirement in 1997. Barb was often willingly on call 24/7 at the nursing home when needed, and upon her retirement she also continued to do volunteer work at the nursing home. She worked there two weekends a month on an “as needed” basis.
Barb was a member of St. John’s Lutheran Church, Gillett. She loved cooking and was always ready to help prepare St. John’s Corned Beef and Cabbage Meal on St. Patrick’s Day.
Barb was a substitute school bus driver for her father-in-law Gwynne Smith, and later for her husband Clayton. She also worked with the former Gillett Joint Ambulance Service as EMT, when needed.
Barb was an avid bowler on various local teams for over 40 years, attending many bowling tournaments.
For several years, Barb was also a member of the Berry Lake Assoc. and met with The Ladies of the Lake every other week for brunch. She was proud when she and her husband were selected as Gillett’s 4th of July Parade Grand Marshalls in 2009. Barb also was a member of the Gillett American Legion Auxiliary Post 300, in addition to the Gillett VFW Auxiliary Post 8314.
Barb was involved in the community serving as Gillett City Alderman from April of 1974 until April of 2011 and Oconto County Supervisor from January, 2001 up until the time of her death.
Barb is survived by her husband Clayton; two sons Kevin and Darrell; two grandsons Andrew and Alex; sister-law Nancy Smith; brother-in-law Art Gandt. Other survivors include nieces and nephews: Tom (Nancy) Upstone, Steve Ziegler, Sue (Upstone) Hancock, Randy MacSwain, Wendy MacSwain, Robin MacSwain, Tammie Schwantes; great nieces, nephews along with many, many friends; and Frenchy, her cat.
Barb was preceded in death by two sisters and brothers-in-law Winifred (Bob) Ziegler; Margo (Karl) Upstone; two sisters-in-law Jean Gandt and Gail MacSwain.
A visitation will be held on Saturday February 18, 2012 at St. John’s Lutheran Church, 101 West Main St., Gillett from 9:00 a.m. until memorial services at 11:00 a.m. with the Rev. Harvey H. Jeffers officiating. Interment at Wanderers Rest Cemetery, Gillett. Graveside services will be held at a later date.
Kuehl Funeral Home P.O. Box 317 Gillett, WI 54124-0317; (920) 855-2144 is assisting Barb’s family with arrangements. Please visit our website at www.kuehlfuneralhome.com to write messages of condolence and sign the guest book if you are unable to attend.
In lieu of flowers, the family requests that memorials be sent to either, The American Asthma Foundation, Four Embarcadero Ctr.; Suite 3150 San Francisco, CA 94111-4113 or The COPD Foundation 2937 SW 27th Ave., Suite 302 Miami, FL 33133.