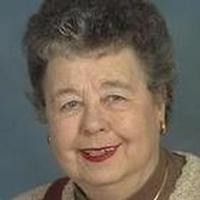 Arletta R. Thibadeau, 87, Gillett, entered into rest Friday, August 30, 2013 at New Care Nursing Home in Crivitz. She was born on August 27, 1926, in Oconto Falls to the late Elmer Landin and Leona Henne. As a young woman Arletta worked for her father at Landin Motor Co. and later on in life began working for the Gillett School District for many years. Arletta also belonged to the VFW, and other organizations such as the St. John’s Christian Women’s Society. She had many hobbies and passions like bowling, traveling, feeding the birds, and tending to her beautiful home, yard and flowers. She also enjoyed her card games, one of her favorites being a game called “Smear” for a quarter a game and a dime a bump! Most importantly Arletta thoroughly enjoyed spending time with her family, dogs, and grand-dogs at the cottage in Townsend. She is survived by two sons, Dan (Sue) Thibadeau, MN (their children Julie and Jeanee), and Jon Thibadeau, Gillett (his son Gavin); two daughters, Paula (Dave) Lintner, Marinette (their daughter Jamie), and Joan (Pat) Suzawith, Amberg. She is further survived by two sisters, Ramona (Tom) Tessier, and Gloria (Dick) Garvey; several nieces and nephews and other relatives and friends. Preceding Arletta in death is her husband, Eugene Thibadeau; her parents Elmer and Leona; a grandson Greg (son of Jon Thibadeau); many brother and sister-in-laws, and other relatives and friends. Arletta will have a funeral mass at St. John’s Catholic Church in Gillett on Wednesday September 4, 2013. Friends may call from 12 p.m. until 1 p.m. with the service beginning at 1 p.m. with Father Dean Dombroski officiating. Interment will follow the service at St. John’s Catholic Cemetery in Gillett with a light social luncheon concluding the graveside service. Kuehl Funeral Home (920)855-2144, will be assisting the family. In lieu of flowers it was Arletta’s request that all memorial contributions be made and sent to a charity of your choice.