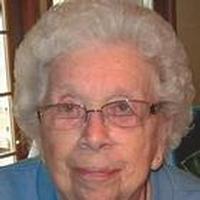 Anita L. (Lust) Schroeder, 91, a resident of The Cottages at the Meadowlands in Oconto Falls passed away peacefully on Thursday, April 2, 2015 surrounded by her family. She was born on September 16, 1923 the daughter of Louis and Henrietta (Eick) Lust. Anita was baptized on September 30, 1923 at St. Jacob’s Lutheran Church in Oconto Falls; and confirmed on March 21, 1937 at St John’s Lutheran Church, Gillett. She graduated from Gillett High School as Valedictorian, class of 1941. On September 22, 1945 Anita was united in marriage to Herbert F. Schroeder at St John’s Lutheran where she remained a faithful member until her death.

Anita worked as a bookkeeper and secretary, first at Ansorge Distributing in Gillett and then at several banks including: Gillett State Bank, First Interstate, Norwest, Wells Fargo, Citizens Bank, and Community Bank of Oconto County which she retired from after a career spanning over 35 years.

She was a member of the Valley Line Homemakers, Kard Klub, Women of the Evangelical Lutheran Church and a 4-H leader. She sang in her church choir, taught Sunday school and participated in a prayer shawl knitting group as well as a quilting group.

Her interest and hobbies included reading, bird watching, flowers, music, dancing, knitting and crocheting. Anita was an avid Green Bay Packer fan, proudly wearing the green and gold. She had an extensive cookbook collection and often gave advice on how to improve a dish; she loved baking, so her apartment was filled with the scent of freshly baked bread or other goodies that she shared with friends and neighbors. Anita led the table prayers at the assisted living facility; making sure everyone held hands and always concluding with “bless the cook”. Her favorite phrase was “Praise the Lord” following anything that made her happy or thankful such as a hamburger from Kroll’s or a paczki from Smurawa’s. She loved her church, her family and her friends; and she was very generous, positive, kind and gracious. Anita’s family was the innermost part of her life, she was the true core, the rock, steady and secure, and was known as the Schroeder family “CEO”. She is now and will always be deep in their hearts; and the love she gave will continue to guide, nurture and support them as they continue through life’s journey.

She is survived by her children, Douglas (Debra) Schroeder, Oconto; Janet (Richard) Jansky Apple Valley, MN and Barbara Schroeder, Appleton. She was known as Grandma Byrd to her grandchildren, Benjamin (Elizabeth) Jansky, Brad (Maureen) Jansky; great-grandchildren Hayden, Luke, Alex, Ari and Senia. She is also survived by her lifelong friend Joyce Brown, other family members, nieces, nephews and many friends.

Anita was preceded in death by her parents, husband and sister Carol Mayer.

Visitation will be held Tuesday April 7, 2015 from 9 A.M. until 11 A.M. at St. John’s Lutheran Church in Gillett. A Funeral Service will be held at 11 A.M. with Pastor Doreen Jeffers and Pastor Larry Bong officiating, burial to follow in Wanderer’s Rest Cemetery, Gillett.