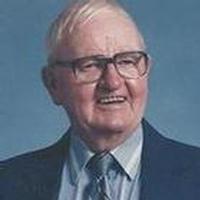 Alvin F. Schaal, age 93, formerly of 9795 Gray Lake Rd., Gillett, died Thursday, August 1, 2013 at Sharpe Care Nursing and Rehabilitation Center, Oconto Falls.
Al was born October 24, 1919 in Gillett to Dudley and Flora (Zahn) Schaal. Growing up during the depression years and his work in the Civilian Conservation Corps to help support his family shaped his attitudes about the importance of hard work and self-reliance. Al became a lifelong “fixer” and saver, and always built things to last. Al proudly served in the 36th Division, 142nd Infantry Regiment of the U.S. Army for four years during World War II throughout Northern Africa, Italy, France, Austria, and Germany. Memories of the battles, death, and destruction stayed with him throughout his life.
On March 3, 1946, he married Lorraine M. Olson. They lived in Gillett until moving to a farm outside Oconto Falls in 1952. About 1980 they settled in rural Gillett. Al was a truck driver and spent most of his career with Scott Paper. He enjoyed hunting, fishing, and camping in his free time. Retirement turned Al and Lorraine into snowbirds, and they spent many happy years wintering in Mesa, Arizona and taking side trips with a senior club. Lorraine preceded him in death on April 11, 2011.
Survivors include his son, Gary (Sandi) Schaal of Oconto Falls; his daughter, Barbara Schaal of Green Bay; two grandchildren, Brian (Lynn) Schaal of Bonduel and Nikki (Nick) Tolzman of Oconto Falls; and four great-grandchildren, Elizabeth, Samantha, and Aaron Schaal of Bonduel and Josie Tolzman of Oconto Falls.
He is further survived by two sisters, Betty (Menasha) and Dorothy (Texas), two sisters-in-law, two brothers-in-law, nieces, nephews, and other relatives. He was preceded in death by his parents; brothers Clarence, Cyril, Francis, and Gordon; sister Grace; and multiple brothers- and sisters-in law.
Funeral services will be held at 11:00 a.m. on Saturday, August 10 at St. John’s Riverside Lutheran Church, Hwy. 32, Gillett with Pastor Ricky Buhrke officiating. Visitation will be from 9:00 a.m. until the time of service. Military honors will be accorded with burial in St. John’s cemetery. Kuehl Funeral Home (920)855-2144 of Gillett is assisting the family. In lieu of flowers, memorials may be made to St. John’s Riverside Lutheran Church.