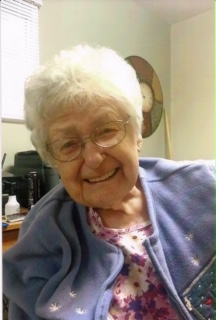 On January 8, 2020, Agnes Mary (Ricken) Wolfe left this earth to join her heavenly family. She was born in Exeland, WI on October 31, 1922, to the late Henry and Grace (McMullen) Ricken.  She married Robert ‘Buster’ Wolfe on May 7, 1941 and they lived first in Springbrook, a short time in California then Brookfield before settling in Gillett in 1963.  Agnes and Bob raised twelve children and farmed for many years. She also alternately worked part-time as a gift wrapper at Gimbels, a factory worker in Milwaukee, and for many years a bus driver for the Gillett School District as well as New View Industries. She was always actively involved with the church Altar Society and choir, as well as teaching CCD and serving as a representative for the Vicariate. She also enjoyed delivering meals to shut-ins with Meals on Wheels.

Her greatest joys were her children, grandchildren, great-grandchildren and even great-great-grandchildren. In her free time she enjoyed crocheting afghans for gifts  as well as entering them in the county fair and baking. She was renowned for her slab apple pie and her egg bread. She and Bob enjoyed bowling and snowmobiling and were members of the local snowmobile club in Gillett.

She was preceded in death by her husband Robert (Bob) Wolfe, sons Robert H. and Allan R. Wolfe, her parents Henry and Grace Ricken, sisters Gertrude Brunner and Elizabeth Ricken, brother William Ricken and several beloved nieces and nephews as well as many in-laws.

Services will be held at 11:00 am on Saturday, January 18, 2020 at St. John the Evangelist Catholic Church, Gillett WI with visitation from 9:00 am to 11:00 prior to service. Burial will directly follow the service in St. John Catholic Cemetery. The family would like to thank the staff at Wyndemere Assisted Living for their care of Agnes.

Arrangements are being handled by Kuehl Funeral Home in Gillett.

In lieu of flowers donations can be made to St. Jude Children’s Hospital https://www.stjude.org/donate/donate-to-st-jude.html or Alzheimers/Dementia research https://act.alz.org/site/Donation2.